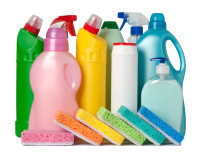 In order to obtain a permit to place a detergent on the EU market, it must be tested as specified in the Regulation. Tests for the rate of biodegradation of surfactants should be performed in laboratories accredited in accordance with internationally recognized standards, namely EN/ ISO/ IEC/17025 or in accordance with the principles of good laboratory practice GLP. Manufacturers are responsible for compliance with the Detergents Regulation.

The information database contains more than 4,000 records on unique hazard classifications of chemicals or their groups according to GHS rev.5.

Department of Economic and Marketing Research